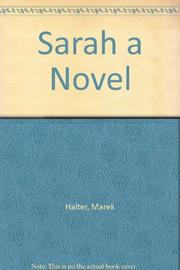 Vol. I, the Canaan Trilogy

The prizewinning French author re-creates the story of Abraham and Sarah and the unlikely steps that led to their giving birth to both Judaism and the Jewish people.

We know that Abraham was the patriarch whose descendants were to be as numerous as the sands on the shore—despite the fact that his wife Sarah made it well into her 80s without bearing a child. Halter (Stories of Deliverance, 1997, etc.) follows the biblical line pretty closely, but he fills in a lot of detail that Moses never wrote down. We learn, for example, that Sarah is the daughter of a nobleman in Ur, in ancient Sumer, and that she is betrothed to a Sumerian prince. At the last minute, however, she rebels against her fate by refusing the marriage and running away. Hiding in the swamps outside the city, she stumbles upon a young man named Abram fishing for crayfish in the glades—and spends the night with him. Abram is a nomad, one of the mar.Tu people whose encampments encircle the city. Later on, Sarah returns to face the music at home but guarantees that she will never have to go through with the marriage by taking a potion that renders her infertile. Now unmarriageable, she becomes a priestess of the goddess Ishtar and presides over the sacred rites (especially the slaughter of bulls) in the temple. Years later, however, she meets Abram by chance and discovers that she is still in love with him. You know the rest: Abram and Sarah run off together and start a new race with the eventual and miraculous birth of their son Isaac, and the world is never the same again.

Halter fleshes out the scriptural account with rich and credible portraits of contemporary life and history, even if his narration (“There was a quivering in her belly that had nothing to do with fear or anger”) occasionally descends to the level of the bodice-buster.