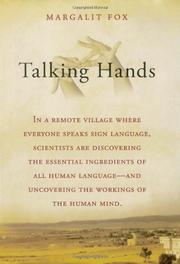 A New York Times reporter considers the case (and the significance) of a unique sign language that has emerged among the many congenitally deaf denizens of an isolated Bedouin village in northern Israel.

Fox struggled to convince an international team of linguists to allow her even limited access to their research site. (Accordingly, the author has altered many identifying details.) She agreed to numerous limitations on her reporting (she could not, for example, interact with the residents in anything but a casual, polite way), and she was on site for only a short time. But she interviewed the principal researchers on numerous occasions, visited them at conferences and spent years studying the acquisition and development of languages—signed and spoken. (Her long list of scholarly references and her many pages of endnotes testify silently to her assiduity.) The chapters alternate between leisurely, amiable narratives of her visits to the village (where the researchers present slide shows featuring objects and actions and ask the villagers to sign appropriately) and long discursive (and often dense) discussions of the relevant history and scholarship. This approach sometimes gives her text a schizophrenic character. Fox has an appealing voice, and she is best when discussing issues of the most immediate relevance to the village. She describes the people, samples the food, notes the architecture, the customs, the oddities (T-shirts bearing contemporary Western messages). In more academic-minded sections, she discusses the differences between spoken and spatial grammar, revealing a complexity in the latter that will surprise many readers, and summarizes the recent research exploring the differing areas of the brain devoted to spoken and signed language.