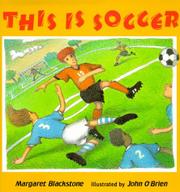 As two young teams face off, a spare, staccato text relates the ever-changing action on the soccer field. Blackstone starts with the basics: “This is a soccer ball. This is a cleat. And this is a soccer player.” Next, she emphasizes the fancy footwork involved and introduces the teams. Then comes the kickoff, and some “running and jumping, bumping and sliding, . . . dribble, pass, pass, dribble, faster, faster, dribble, pass—KICK! This is an overhead shot.” With a potential goal, the goalie launches himself into space trying to catch the ball, the crowd goes wild, and the ball lands in the net. Blackstone (This Is Maine, 1995, etc.) emphasizes that there’s always more shooting than scoring in soccer; sometimes the final score is “zero to zero.” O’Brien’s illustrations capture the feeling of full-tilt playing, showing quick turns and sudden stops, moving in for close-ups and backing up for a distant pan of the whole field. In a humorous visual subplot, an unperturbed fan sets out his lawn chair on the title page and sleeps through the entire game. It’s a bonus in an already inviting introduction to the fast-paced and fleet-footed game of soccer. (Picture book. 6-10)