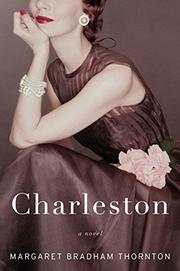 A woman’s dilemma—whether to forgo an international academic career for romance in her native Charleston—is the subject of Thornton’s debut.

Charleston, South Carolina, circa 1990, is an insular world where a clique of founding families cherishes their heritage, clinging to antebellum ways while snubbing the tourists and newcomers who are fueling the city’s economic resurgence. It's a world with which Thornton is, clearly, intimately familiar, and as a portrait of a city mired in the past, it works. What works less well is the story she sets against this headily atmospheric backdrop. Eliza, who, like the author, is an academic and a Charleston insider, attempted to escape her roots by moving to New York and then London to study art history. She has a liaison with Jamie, an upper-crust Englishman, but she has unresolved feelings for her childhood sweetheart, Henry, whom she left when he was unfaithful. His alcohol-fueled fling with an unbalanced Southern belle, Issie, resulted in an unplanned pregnancy and a hasty marriage and divorce. Devoid of motherly feeling, Issie has let Henry raise their son, Lawton, now 9, alone. On a visit home after a 10-year absence, Eliza is ineluctably drawn back to Henry. The only problem, besides a complete lack of narrative drive, is the absence of believable chemistry between Henry and Eliza. The couple’s rapprochement is eked out in long scenes of walking and driving, calling on friends, trips to the beach and to tennis matches, etc., which unspool with excruciating slowness almost in real time. Not until Page 200 does trouble surface in the form of a newly maternal Issie, who finally triggers some dramatic tension. It's telling that a subplot involving Eliza’s quest to authenticate a painting for an impoverished Charleston widow is more engrossing than the love story.

The moving close can't redeem this novel; most readers will have given up long before the end.