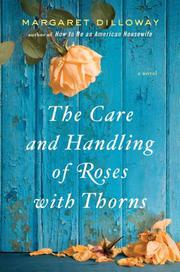 THE CARE AND HANDLING OF ROSES WITH THORNS

The life of a high school biology teacher parallels her cultivation of roses in Dilloway’s (How to Be an American Housewife, 2010) exquisitely written novel about love and redemption.

Thirty-six-year-old Galilee Garner suffers from kidney failure, a condition that has defined her life. After undergoing two transplants, which ultimately failed, Gal is back on dialysis while hoping for another kidney. She is insular, obstinate and regimented in her private life, and these attributes have spilled over into her professional life, making her unpopular with many students and their parents. Gal sets the bar high and refuses to cut anyone, including herself, any slack, and she has trouble viewing issues from anyone else’s perspective. Socially isolated except for fellow teacher Dara, who often drives Gal to and from her dialysis treatments, and Brad, a star student who helps Gal as part of his senior community service requirement for graduation, Gal rarely goes out. The only time she is relaxed and happy is when she is tending her roses, the one passion Gal allows in her life. A methodical breeder, Gal hopes to develop a rose that will win Queen of Show at competition. When her 15-year-old niece, Riley, appears at her school one day after a seven-year separation, Gal reluctantly allows Riley to move in. She resists the changes that occur in her orderly, measured and exact routine and stubbornly refuses to compromise her principles. But as Riley helps Gal with her roses and they begin to form a bond, she changes in slow but subtle ways. No longer as inflexible as she once was, even when she discovers a disturbing secret about her students, Gal reaches out to a fellow dialysis patient, a new colleague at school and her older sister.

A witty and compassionate lesson about the importance of empathy, friendship and family.