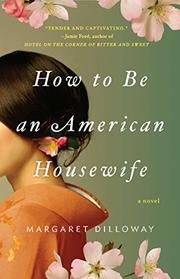 HOW TO BE AN AMERICAN HOUSEWIFE

At the end of the war, 18-year-old Shoko had to go to work so her younger brother Taro could finish school, even though she was the better student. As a girl, her mission was to find a husband, and her father hoped she would marry one of the American occupiers, though her brother hated them. But Shoko fell in love with Ronin, a member of the “untouchable” caste still despised in modern Japan, and only married kindly American Charlie after Ronin was killed. We learn all this from the elderly Shoko, settled in San Diego since Charlie retired from the Navy and now facing surgery for a heart condition, probably a legacy of radiation from the bomb blast at Nagasaki, 50 miles from her childhood home. Though Taro has refused to communicate with his sister since she married an American, Shoko has unfinished business in her homeland, and when her doctor forbids her to make the trip, she persuades daughter Sue to go in her stead. Sue, a divorcée with a preteen daughter and a paper-pushing job that bores her, has always felt that she disappointed her mother—and in fact, Shoko’s narration of Part One reveals a cranky, difficult woman, unable to show love except by criticizing and still carrying around a load of resentments from her childhood. Part Two, Sue’s account of her visit to Japan, is considerably softer-edged; she meets two welcoming cousins and manages to crack Taro’s grumpy façade, collecting the white funeral kimono Shoko has requested of him and eliciting fond memories of his sister as a baseball-playing tomboy in prewar Japan. The transition is a little abrupt, and the closing sections are more reassuring than Shoko’s narration led us to expect. Readers looking for a strong story that turns out well for sympathetically rendered characters will not complain.

Warm-hearted and well-written, if a trifle pat.