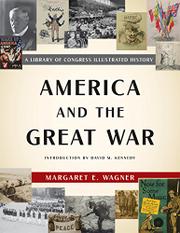 AMERICA AND THE GREAT WAR

A Library of Congress Illustrated History

The latest installment of the Library of Congress’ series of illustrated histories and timelines, this one focusing on World War I.

Beginning in 1912, Wagner (The Library of Congress Illustrated Timeline of the Civil War, 2011, etc.), a senior writer/editor at the LOC Publishing Office, describes the isolationism gripping the United States; many citizens, experiencing a wave of societal changes, were distrustful of a standing army. With the speedy growth of invention—e.g., electricity, cars, planes, telephones, moving pictures—income inequality and labor relations exacerbated anger and friction. The war wasn’t much of a surprise after the Balkan Wars exposed interference from both Turkey and Russia, making Austria-Hungary nervous. America faced her own threats. The Mexican Revolution spilled over into Texas, raising demands that Wilson send in troops. Here, as she does throughout, Wagner depicts events not often given sufficient coverage in history books. Mexico pushed us toward war, with lots of prodding from Germany, and Japan was taking its turn saber-rattling in the Pacific. Many pacifist Americans spoke out against the war, including Jane Addams, Henry Ford, and Sen. Robert La Follette. When war did break out, Americans rushed to send aid but refused to join. Wilson and Congress, fearing a fifth column, passed the Espionage Act in 1917, which quickly exposed poor intelligence services that relied on informers and vigilantes convicting the innocent. Germany’s decision to return to unrestricted U-boat warfare in 1917 reminded Americans of the sinking of the Lusitania in 1915. But the tipping point was the Zimmerman telegram, which proposed an alliance between Germany and Mexico. The author elaborates on how little help the U.S. provided at first; lack of equipment, the need for conscription, and lack of boats to transport them were only parts of the problem. The troops were trained, finally, but not in methods useful in the trenches.

A fresh, enlightening look at American society as it reluctantly worked its way into being a world power—most valuable to historians and sociologists.