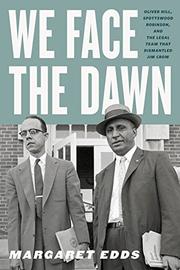 WE FACE THE DAWN

A thoughtful historical account of a legal campaign that formed one of the main pillars for Brown v. Board of Education.

In 1948, Oliver Hill and Spottswood Robinson, two African-American attorneys, mounted a signally important challenge to the notion of separate but supposedly equal education for black and white youth, a notion that “had to be unmasked as a fraud” and that was materially harmful to the children who labored under it. A federal judge in Virginia agreed with their contention to the extent that he ordered what amounted to desegregation, an order that school officials simply ignored. Underlying the legal challenge was a program mounted by the NAACP’s lead lawyer, Thurgood Marshall, who would go on to be a Supreme Court justice. Marshall, notes retired journalist Edds (Finding Sara: A Daughter’s Journey, 2010, etc.), “had tapped Robinson the previous winter to go county by county in Virginia investigating school inequalities and preparing lawsuits.” A brilliant young attorney working with the older Hill, Robinson had gone about that work energetically, even as the Supreme Court made a key decision in 1949 to desegregate state universities in Texas and Oklahoma. Robinson and Hill’s ongoing work in desegregating public schools in Virginia, by the author’s account, provided a material basis for the decision five years later to overturn desegregation throughout the land. Edds paints a compelling portrait of the two men, badly overworked but committed, with Hill moving at ease in Richmond social circles while calmly refusing to be shut out. As a candidate for the state legislature, for example, he had sat with white voters and had a beer with them. In fact, writes the author, his “refusal to accept that he did not belong was perhaps even more groundbreaking than his candidacy.” In this respect and many others, Hill and Robinson provide exemplary—and timely—models of citizenship.

A welcome contribution to the literature of the civil rights movement.