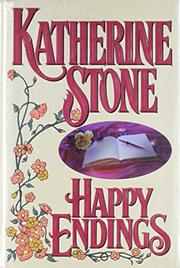  A sob story with a silver lining: Beautiful people suffer and are saved through the transfiguring power of love. Stone (Rainbows, 1992) has penned another quick-reading formula romance. Once again the basic premises are out of Danielle Steel: You can wear Armani, drive a Jaguar, and still be miserable; you can't be too rich or too thin to need love. The plot is crowded with overachievers looking for happiness. In her Los Angeles penthouse, flawlessly beautiful attorney Raven Winter can't find true love because of the poverty and abuse she suffered as the daughter of an outstandingly terrible mother. When she is almost run over by Nick Gault, the blindingly handsome CEO of Eden Enterprises, he pretends to be a gardener because he too has been wounded by life: His ex-wife married him only for his money (hard to believe, considering his steel gray eyes and other staggering assets). Raven, the ``Snow-White Shark,'' is the lawyer for sexy, successful producer/director/actor Jason Cole, who begins the story by winning seven Oscars. Jason, preparing to make a movie of the bestseller Gifts of Love, plans to change the book's happy ending. Its desperate author, Holly Elliot, flies from her Alaska home to persuade Jason to change his mind. Holly, whose stepfather murdered her mother, brother, and sister, doesn't know that her real father, Lawrence, was not killed in Vietnam and has become a veterinarian. Stone provides all her tortured, gorgeous characters with their own happy endings and no explicit sex. She makes a lot of the issue of abortion without the consent of the father. All in all, a stock genre effort, albeit one handled with dispatch. No surprises, very syrupy, and very moral. The Jaguar finds a Lexus; no one should have to park alone.