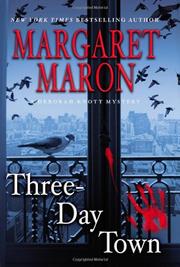 Having delayed their honeymoon for over a year, Deborah Knott and her husband, Colleton County Sheriff’s Deputy Dwight Bryant (Christmas Mourning, 2010, etc.), finally head off to Manhattan, where they’ve been loaned an apartment on the Upper West Side. One of Deborah’s distant kinfolk asks her to deliver a small, hefty package to homicide cop Sigrid Harald’s mom. But when Sigrid comes to claim it, a beach-party-in-January is raging in the co-op next door, guests are roaming the halls and the package has gone missing, along with some valuable antique boxes. Oddly, a papier maché Mexican cat has been left in their place. More oddly and much worse, the building super is lying dead on the minuscule balcony. Dwight begins making a list of the partygoers while Sigrid calls on reinforcements from the precinct and Deborah tactfully labors to explain what was in the box from the South. The pace picks up when an art curator whom blizzard conditions have stranded in the extra bedroom in Deborah and Dwight’s borrowed apartment recognizes the contents as one of sculptor Al Streichert’s valuable maquettes, an erotic, racist preliminary model for a major piece of work. One of the building’s elevator operators runs off. The son of the co-op board’s chairman disappears. Questioning discloses that there’s a kleptomaniac in the building; a couple about to be evicted; and security problems with some of the locks. Like many a nosy heroine before her, Deborah lands in the villain’s clutches, almost adding to the death total.

Dwight’s obsession with New York gourmet delights and Deborah’s passion for stylish, impractical footwear are charming, but Sigrid’s slow but steady police work carries the day. Fans who have hankered for Deborah and Sigrid to find themselves in the same story will be charmed.