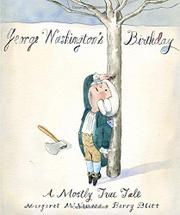 This potentially amusing blend of story and historical fact feels a bit strained.

“When George Washington went to sleep Friday night, he was six years old. When he woke up on Saturday, he was seven.” Eager to observe his birthday but thwarted throughout the day, George studies with older brother Augustine, spends a bored few minutes heaving rocks across the Rappahannock, helps his father prune the cherry trees with disastrous results and finally celebrates at dinner with his loving family. The boy’s concerns about a seemingly forgotten birthday will resonate with young readers, and Blitt’s signature caricature style in watercolor is lively and droll. McNamara offers both facts and myths—presented in bordered inset captions—about the grownup George that relate to her fictional account of his seventh birthday. For example, as George crosses an icy creek carrying the remains of the cherry tree (“Hope I never have to do this again”), the caption reveals that in fact he had to cross the Delaware many times “in one of the most important battles of the Revolutionary War.” The author offers a first-person narrative in Washington’s voice, “George Washington Tells the Truth,” following the picture-book story.

Overall the connection between the boy and the future general and president is labored and tenuous, and it may well baffle young readers unfamiliar with most of those stories.