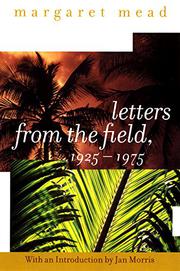 When Margaret Mead left for Samoa in 1925, she had never been abroad, never spoken a foreign language, never spent a day alone. These letters were intended to acquaint a close circle of family and friends with the nature of her work—arranging housing, accumulating children's drawings, tending the sick, negotiating for simple translations and access to rituals. In Samoa she finds the food starchy, the expectation of regular speeches exhausting. En route to Manus, she marvels at the wonders of Pidgin; once there, she contends with "crazy circumlocutions," avid native traders, and an informant "who is five feet six of sulky uselessness most of the time." In New Guinea, Mead and Reo Fortune use salt as currency and master 24 third-person pronouns. Bali has dancing, cockfights, and seven-hour cremations. By the Fifties, her audience enlarged by professional associations and the miracle of photocopiers, the letters are somewhat more formal but equally fluent; altogether, they document the evolution of an attitude and the refinement of techniques that now support anthropology. For even as she records the particulars, she fixes on the larger scene—the delicate relationship between fieldworker and subject. And many years later, returning with videotape instead of notebook to observe willing changeovers to 20th-century lifestyles, she meets past informants, reflects on transitions, and urges this graceful recognition: "when one works in a culture in which the people become literate, one's own work becomes part of their sense of their own history." Written in the unencumbered style of Blackberry Winter, with the same regard for paradox and continuities, her letters furnish a vivid, uncensored overview of emerging sensitivities and the shaping of a discipline.