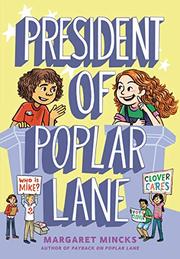 From the Poplar Kids series, volume 2

Poplar Lane’s seventh-graders are back for a second outing following Payback on Poplar Lane (2018), exploring magic, manipulation, and politics.

Clover, a popular girl, and Mike, a budding magician, are both nominated to run for class president. New kid Amelia, a self-described “wonk,” and Peter, a fervent entrepreneur, are running Mike’s campaign, while Clover’s best friend, Rachel, is managing hers. Unfortunately, Mike’s managers craft an image of the candidate that’s mostly deceitful, turning him from a boy who’s happy to sit quietly with headphones on, comfortably blocking out the world, to a glad-handing, baby-kissing fraud. He’s only running so he can use the election to help him get into magic camp. Clover is using her campaign to try to restore her connection to Rachel, who’s become friends with Amelia, leaving her feeling excluded. The story is presented in the nicely distinct alternating voices of Clover, who’s the second of five sisters and also coming to grips with her mother’s newest pregnancy, and Mike, who’s sure his father is disappointed in him for not being athletic. Mike is black, standing out among the mostly white central cast. In a refreshing variation on most middle school fiction, all of the kids have good points and bad, creating a full roster of believably rounded characters navigating sometimes-silly situations, rich with droll, timely humor.

The votes are in: This one is a winner.