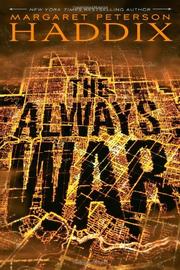 For the past 75 years, Tessa’s nation has been at war—a war that has no end in sight.

Tessa lives in a community of weary people, visibly crushed by endless years of combat. They are numb; war is commonplace. But when a local boy receives an award for bravery—the nation’s highest—it lifts the city. Everyone, especially Tessa, desperately needs a hero. But Gideon shocks the town by refusing the honor. He declares himself a coward and runs away. He has killed more than 1,000 people; there is no honor in that. But that’s what war is, isn’t it? Killing the enemy is necessary. Gideon infuriates Tessa, but she is inexplicably curious as well. She follows him and ends up on a plane, with Gideon steering it straight toward the enemy line. He hopes to apologize, to atone for his mistakes, but what he and Tessa (along with a stowaway orphan named Dek) find when they open the plane’s door changes the plan dramatically. This dystopian drama examines the human aspect of war, and also how technology may redefine war in the future. In line with that tension, it is difficult to pinpoint which character grows the most in the narrative—Tessa or the computer.

If hoping to grab a heartfelt connection, readers may feel sidelined, but plot turns will certainly keep them entranced.