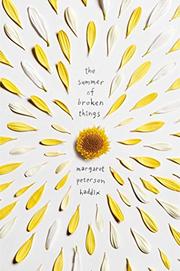 THE SUMMER OF BROKEN THINGS

For two American teens, a summer trip to Europe turns out to be far more complicated than they ever expected.

Avery doesn’t want to go to Spain with her dad—she’ll fall behind in soccer and he’ll just be working all the time. When she finds out that he’s already chosen a “friend” to accompany her—Kayla, an older girl she used to play with as a little kid—the summer feels even more doomed. But for Kayla, it’s an opportunity of a lifetime, a huge gift her family could never afford. In Spain, the two white girls struggle to find their places among the locals and their language class friends as a jaw-dropping revelation changes their relationship forever. It takes a near tragedy to make them realize that while they might not have chosen this path, how they move forward is their choice. Through chapters told in alternating points of view, Haddix offers a fully realized portrayal of teen girls dealing with the vagaries of their parents’ lives. Spain forms a vivid backdrop to the girls’ confusion and revelations, and Avery and Kayla are each so completely sympathetic that it’s hard to choose whom to root for when they’re at war.

The trip to Spain you wouldn’t wish on anyone, except in the form of this terrific book.