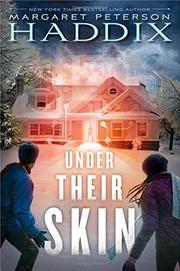 A pair of twins can’t resist disobeying their parents when they learn that their family has a secret—from them.

Eryn and Nick, 12-year-old fraternal twins, have easily coped with their parents’ divorce. When their mom announces she’s getting married again, however, they’re upset to learn that they’ll be moving into a new house—and they’re even more upset when she tells them that they are not allowed even to meet their new stepfather’s children, Ava and Jackson. Worse, they overhear their mother saying that there’s something about their new stepsiblings that would put Eryn and Nick in danger if they ever discovered it. Naturally, Eryn and Nick are compelled to investigate. But the secret does indeed bring danger and has consequences far beyond their own two lives. Haddix begins this new duology with two new characters that appear, at this stage at least, to be a bit less annoyingly impulsive than her protagonists in her recent Missing series. Eryn and Nick are relatively thoughtful as they find themselves in a situation so precarious they cannot even allow their own parents to know what they have discovered. As usual, Haddix demonstrates plenty of emotional insight; young readers easily will see themselves in these characters. Suspense builds up to the last page, when yet another secret leaves readers hanging for the conclusion.