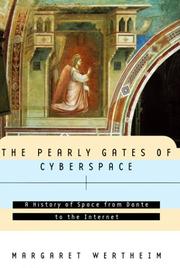 THE PEARLY GATES OF CYBERSPACE

A History of Space from Dante to the Internet

Is the Internet really a place where disembodied souls can find freedom? Science writer Wertheim (Pythagoras’ Trousers: God, Physics, and the Gender Wars, 1995) builds a strong historical and philosophical case for the spirituality of cyberspace. According to Wertheim, the medieval worldview posited an essential dualism between the physical body, which existed on earth, and the soul, which could ascend to a higher heavenly plane. With the advent of modern science, however, all realms were incorporated within the rubric of physical space. The body still had a habitus, but the soul was displaced. Wertheim labors a bit too long on the history of this interpretive transformation, devoting whole chapters to the nature of heavenly space as depicted in Dante and Renaissance art (though the breadth of her knowledge of philosophy and art history, as well as science, shows her to be a rare “Renaissance” thinker). She then explores how the Enlightenment effectively abolished celestial space by declaring the supremacy of empirical reality, and how the 20th century has inaugurated something called “hyperspace”: space is all that can be said to exist. Even matter is only reconfigured, curved space. The last third of the book throws cyberspace into this historical mix. Wertheim argues quite cogently that cyberspace has superseded concepts of hyperspace to become a kind of “metaphysical gateway,” a threshold into an entirely new dimension. Well, not new exactly. In one of the book’s genius strokes, Wertheim hearkens back to the medieval concept of space to declare that the more things change, the more they stay the same. Like the medieval thinkers, cybernauts cling to the Internet as a sort of heavenly sphere where bodies, age, race, gender, and nationality cease to exist. Ironically, our most stunning scientific achievement has returned us to a spiritual dualism. And Wertheim claims that this is ultimately “an essentially positive vision,” since cyberspace is built upon a network of human relationships. Dense but marvelously provocative. (37 b&w illustrations, not seen)