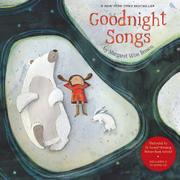 In an introduction, estate editor Amy Gary explains how she found a trunk in Brown’s sister’s barn filled with unpublished manuscripts with Brown’s handwritten notes along with musical scores of her words. They were written in 1952, the last year of her life, when she was traveling in France for a book tour and under contract to create songs for a new children’s record company. Brown’s intent was to capture the spirit of a child’s world in her songs as she had done with her stories. As the opening to “The Secret Song” demonstrates, the simple rhymes have Brown’s trademark charm: “Who saw the petals / Drop from the rose? / ‘I,’ said the spider. / ‘But nobody knows.’ / Who saw the sunset / Flash on a bird? / ‘I,’ said the fish. / ‘But nobody heard.’ ” Each song is presented on one double-page spread, each illustrated by a different artist (uncredited until an ending recap), in a rather staid book design that does not rise to meet the buoyancy of the lyrics.

Nevertheless, children will enjoy the whimsical scenes, and adult mavens of children’s literature will appreciate and delight in the background of the discovery.