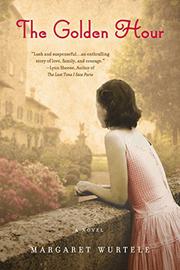 The daughter of wealthy Tuscan estate owners whose home has largely been requisitioned by German officers, Giovanna Bellini is a pampered 17-year-old during the German occupation in 1943. Having graduated from the local Catholic academy, she grudgingly helps the nuns tutor refugee children. Although her older brother Giorgio has run away to join the resistance, she also begins a flirtation with Klaus, a married German officer who she notes is an engineer and not a member of the SS. Wurtele meticulously delineates Giovanna’s giddy crush on Klaus, as well as her conflicting self-justification and guilt while purposely keeping Klaus’ motives ambiguous so that as events unfold the reader never knows his role—despite the sense of responsibility Giovanna assumes. After a nun catches the two having a rendezvous and tells Giovanna’s parents, she arranges one last assignation during which Klaus gets angry when she breaks things off. Meanwhile Giorgio enlists her help in smuggling food and supplies to the partisans. Her work is supposed to be secret, yet she involves an ever-widening circle of friends in the effort. Incredibly, none leaks a word to the enemy. Through Giorgio she meets Mario, an injured partisan who shares a similar upper-class Italian background except that he happens to be Jewish. Giovanna, already doubting that she wants the conventional, safe life her loving but narrow-minded parents expect for her, becomes aware of her own ignorance about the plight of Italian Jews and of her own father’s self-serving if genteel anti-Semitism. Mario’s injury becomes infected. With help from an unexpected source, she finds him a safe hiding place to recover, then steals him life-saving penicillin from the secret clinic run by a neighboring marchesa, Giovanna’s moral mentor. Love also blossoms, the American forces approach, but risks remain high.

Giovanna is a wonderful character full of human contradictions, but the novel bogs down once she becomes a conventional noble heroine.