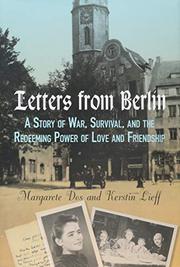 A Story of War, Survival, and the Redeeming Power of Love and Friendship

by Margarete Dos and Kerstin Lieff

A daughter turns her German mother’s harrowing memories of living through the liberation of Berlin into a moving insider’s account of the time.

Lieff assumed that her mother, Margarete Dos, who was a young teenager in Berlin during World War II and who died in 2005 at age 81, knew about the gas chambers and other horrors executed by Hitler’s regime. Her mother had never wanted to talk about the war and afterward, when Dos and her mother ended up in a Russian gulag for two years. However, finally hearing her mother’s memories over the three years they spent systematically recording them at the end of her life, then finding love letters to a German soldier her daughter had never heard of, threw tantalizing ambiguities over her mother’s life and provoked new questions for Lieff. The author does an admirable job of reconstructing her mother’s extraordinary journey, allowing the frankness of detail to reflect the integrity of her mother’s voice. Indeed, the young Dos went from an Edenic childhood in Swinemünde, with doting parents and a younger brother, to Berlin after her father’s death and the remarriage of her mother. Dos claimed her family never joined the Nazi Party and were always held in some suspicion; nonetheless, she and others were swept up in the general euphoria promised by the Nazis in the wake of hyperinflation and unemployment, until it all began to “feel wrong and frightening.” Dos attempted to study medicine and work as a nurse, even as she and her mother navigated bombings, food rationing and the liberation of Berlin by the Russians. Fleeing their savagery, they tried to make it to Sweden but were imprisoned for two brutal years in the Russian gulag.