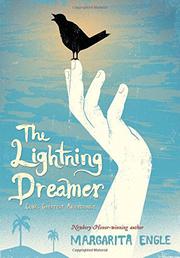 An inspiring fictionalized verse biography of one of Cuba’s most influential writers.

Newbery Honor–winning Engle (The Surrender Tree, 2008) here imagines the youth of Cuban-born Gertrudis Gómez de Avellaneda (1814-73), a major 19th-century writer who was an abolitionist and feminist opposed to all forms of slavery, including arranged marriage. From Sab, her subject’s 1841 abolitionist novel, Engle loosely deduces her artistic development, not only including the two arranged marriages she refused in real life, but the budding writer’s struggles at home. There, “Tula” was subjected to the discriminatory views of her mother and grandfather, who sought to educate her only in the domestic arts since, according to Mamá, “Everyone knows that girls / who read and write too much / are unattractive.” Denied the education her brother received, Tula laments, “I’m just a girl who is expected / to live / without thoughts.” Engle’s clear, declarative verse animates the impassioned voice of Tula as well as other major figures in her life—her sympathetic brother, Manuel, the orphans she comes to love and entertain with grand plays meshing themes of autonomy and racial equality, and her family’s housekeeper, Caridad, a former slave who is eventually inspired by Tula’s wild tales of true emancipation to leave her confining situation.

Fiery and engaging, a powerful portrait of the liberating power of art.