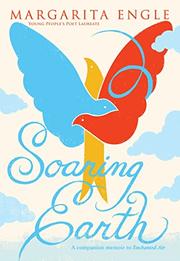 This companion memoir to her award-winning Enchanted Air (2015) is written mostly in free verse with a spot of haiku and tanka. This is a lonely dreamer’s tale of a wayward yet resourceful young woman who zigzags to self-discovery amid the Vietnam War, Delano grape strike, moon landing, and other key historical events. Dreaming of travel to far-off lands but without the financial resources to do so, she embarks on a formal and informal educational journey that takes her from Los Angeles to Berkeley, Haight-Ashbury, New York City, and back west again. With Spanish interspersed throughout, Engle speaks truthfully about the judgment she has faced from those who idealized Castro’s Cuba and the struggle to keep her Spanish alive after being cut off from her beloved mother’s homeland due to the Cold War. Employing variations in line breaks, word layout, and font size effectively, Engle’s pithy verses together read as a cohesive narrative that exudes honesty and bravery. While younger readers may not recognize some of the cultural references, themes of dating, drugs, and difficulty in college will resonate widely. Finding one’s path is not a linear process; thankfully Engle has the courage to offer herself as an example.