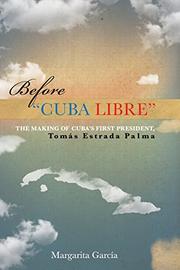 A debut work examines one of the first leaders of Cuba after its independence from Spain.

In this history book, García shares the story of Tomás Estrada Palma, who served as Cuba’s president in the first decade of the 20th century. The volume opens in central New York, where Estrada Palma was living in exile at the time of his election to the presidency, and follows him on his return to his native country before the text diverts into a brief biography in which García does an excellent job of distinguishing the known facts of his life from the many rumors and half-truths that have arisen from the limited information available about his early years. The book also covers Estrada Palma’s involvement in politics and the fight for independence from Spain, leading to his capture as a prisoner of war, and his peripatetic career in Europe and the Americas following his eventual release. The author explains the challenges Cuba’s would-be liberators faced under international law as well as the importance of the lobbying and public relations campaigns Estrada Palma oversaw while living in the United States (“The details of the suffering of the Cuban civilians at the hands of the Spaniards” were publicized “widely by Estrada Palma and the Junta, gaining sympathy to their cause by more and more segments of American public opinion and more and more politicians”). The years after his return to Cuba, including his presidency and resignation, are addressed only briefly in the final chapter; García writes that the book “is limited to his life ‘outside Cuba’ which is least known.” Eliding this period of history, which led to one of several occupations of Cuba by the United States that occurred between the Spanish-American War and the Cuban Revolution, leaves the reader unfamiliar with Cuban history at something of a disadvantage, though it does permit a far more focused narrative than would be possible with greater context. García’s research is evident throughout, with sources thoroughly cited and historical photographs appearing frequently to provide illustration. The author delivers a solid and clearly written summation of one chapter in Cuba’s history, with an emphasis on the long-standing connections to the United States that have shaped the island’s fate.

A well-researched and authoritative history of a Cuban exile who became president.