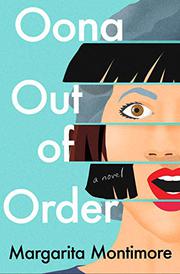 OONA OUT OF ORDER

What would you say to your younger self if you could give her advice?

“Wise beyond their years” is an expression we’ve all heard before. But for one Brooklyn teen, that saying becomes all too real when an unexplained event causes her to begin living her adult life in random order. On New Year’s Eve 1982, Oona Lockhart is about to turn 19. Change is on the horizon, as she must decide whether to leave school to tour with her band, Early Dawning, or quit the band to continue her studies in London. Does she follow her loving boyfriend and band mate, Dale, or does she make a stable, independent decision for herself? Almost as if standing on a precipice between past and future, Oona finds it important to tell herself: “Remember this party. Every second of it. Every person here.” When the clock strikes midnight, she opens her eyes to a reality far different from the one she'd been experiencing—and decades later. The abrupt shift sets the pace for the rest of the book—it turns out that even when you’re living life out of order, time passes just as quickly. Right as you settle in with one version of Oona, whether it be free-spirited, club-going Oona or middle-aged investor Oona, it’s almost New Year’s again. The effect is something like narrative jet lag, making it impossible to feel grounded in time. Which is, no doubt, the point. Montimore (Asleep From Day, 2018) is not afraid to wrench Oona from one season of life to another, satisfied with ending a year in a fashion as incomplete as this: “She didn’t get a chance to finish her sentence.” These vignettes, removed from linear neatness, celebrate the unpredictability and imperfect nature of life. Even when Oona has the opportunity to leave notes for the next version of herself, it doesn’t always mean she’ll follow her advice. With each temporal shift, Oona is left longing for what came before, but supporting characters like Oona’s mom, Madeleine, and confidante, Kenzie, serve as talismans that guide her back to the present. In the end, we must give credit to Oona for finding joy and even humor in her situation and to Montimore for developing a complex narrative held together by simple truths. Read this to get a bit lost, to root for a character with a strong love for herself, and to connect on a deeply human level with the fear of leading an incomplete life.

A heartfelt novel that celebrates its implausibility with a unique joie de vivre.