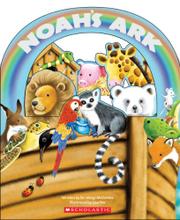 A very simple retelling of Noah and the Great Flood.

In rhyming verse, God tells Noah (“a brave, good man”) to build an ark and gather the animals as a couple of unnamed members of his family help out. Five double-page spreads present the scenes from this section of Genesis, ending with the appearance of the rainbow as God says “No floods like this again.” While the text succeeds in highlighting the parts of the story of most interest to the youngest children, the verse has several hiccups. The boldly colored art, which looks to have been created digitally, includes a wide variety of critters in the scenes, including two clown fish jumping through the waves. Unfortunately, it falls down in presentation as some of the cartoon animals and backgrounds look quite detailed and crisp, while others are jarringly blurred. More enticing for little ones will be the shaped, die-cut pages. The top of the book is arched like the rainbow or, depending on the page, the ceiling of the ark, and the curve also acts as a handle for toddlers to grasp. The die cuts allow the animals to peek through subsequent pages, but some stray images, like the top of the ark or Noah’s head, show through in odd places.

While the gimmick is fun, this ark doesn’t hold water.