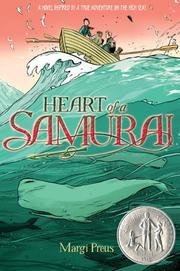 HEART OF A SAMURAI

Based on the True Story of Nakahama Manjiro

In 1841, 14-year-old Manjiro joined four others on an overnight fishing trip. Caught by a severe storm, their small rowboat was shipwrecked on a rocky island. Five months later, they were rescued by the crew of a whaling ship from New Bedford. Manjiro, renamed John Mung, was befriended by the captain and eventually lived in his home in New Bedford, rapidly absorbing Western culture. But the plight of his impoverished family in Japan was never far from Manjiro’s mind, although he knew that his country’s strict isolationist policy meant a death sentence if he returned. Illustrated with Manjiro’s own pencil drawings in addition to other archival material and original art from Tamaki, this is a captivating fictionalized (although notably faithful) retelling of the boy’s adventures. Capturing his wonder, remarkable willingness to learn, the prejudice he encountered and the way he eventually influenced officials in Japan to open the country, this highly entertaining page-turner is the perfect companion to Shipwrecked! The True Adventures of a Japanese Boy, by Rhoda Blumberg (2001). (historical note, extensive glossary, bibliography.) (Historical fiction. 9-13)