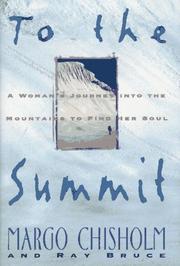 A Woman's Journey into the Mountains to Find Her Soul

The compelling, if at times aggravating, tale of Chisholm's journey from the land of the dead to the thin air of high peaks, told with the help of Bruce, an editor for Self-Help Psychology magazine. In her mid-30s, Chisholm was a wreck: hooked on booze and dope, unable to control her eating, tempering her moods with Nyquil and Sinutabs, fancying she was controlling her weight with a massive daily intake of laxatives, unable to go to work or even get out of bed. Thanks to fate, destiny—call it what you will—she found her way to a rehab group that got the recuperative ball rolling, and coincidentally, in the mid-1980s, Chisholm discovered mountain climbing. She wanted to climb the seven summits, the highest mountains on each continent, and her quest became a bit of an obsession: She wondered if she simply switched one addiction for another. But her motives feel purer than that. She was trying to claw her way out of a deadly slough, and she realized she had to be physically and spiritually up to the challenge. Spiritually, Chisholm discovered God, and readers may feel they have been foisted into a confessional role. Her mantra is ``God's love, God's strength, God's will, I can.'' Inner voices dog her: The pessimist Martha and the perfectionist Ghost in White taunt her unmercifully. Physically, the adventurer's quests were daunting: Kilimanjaro, Denali, Cerro Aconcagua, Everest, mountains that demand resources no non-mountaineer could imagine. Chisholm's excitement at being on the roofs of the world, or at least sitting under the eaves at base camp—highly descriptive, with nuggets of climbing wisdom—is palpable. When Everest eludes Chisholm, and she takes it in stride, readers may sense that she has covered her most impressive terrain. (photos, not seen) (First printing of 60,000; author tour)