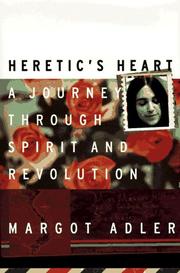 A Journey Through Spirit and Revolution

A stunningly revelatory chronicle of a generation long misunderstood. Adler has made a name for herself as a superb radio journalist (she's New York bureau chief for National Public Radio) and as a leading authority on paganism, feminist spirituality, and witchcraft (Drawing Down the Moon: Witches, Druids, Goddess-Worshippers, and Other Pagans in America Today, 1979). Now Adler proves herself a vital social historian as she shatters the myth that the 1960s were simply sex, drugs, and rock 'n' roll. Using her own life as a jumping off point, Adler insightfully traces the growth of a generation, the development of a society in flux, and her own spiritual, political, and intellectual evolution. The only child of rather unusual parents—her mother was a flamboyant radical educator while her father was a psychiatrist and the son of Freud collaborator Alfred Adler—Adler grew up in a home of Communist sympathizers during the McCarthy era. Throughout the '60s she was a Forrest Gump of sorts, on the scene at a variety of momentous events. She participated in the Free Speech Movement at Berkeley, the black voter registration drive in Mississippi, and the Cuban revolution. She also corresponded for a long time with an American soldier stationed in Vietnam. Through it all Adler wrote letters, lots of letters, which she uses as her memory bank. ``Much of my journey was already on paper before I sat down to write it,'' she notes in her introduction. To suggest that Adler's task was simply secretarial, however, is to belittle the depth and honesty with which she addresses her subject. She is extraordinarily open, not only in her analysis of the social movements she chronicles but also about herself and her attempts at understanding. A candid book whose look backward provides a hopeful blueprint for reviving the possibilities that seemed so endless in the 1960s. (Author tour)