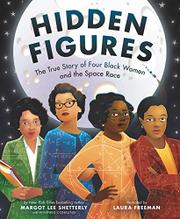 The True Story of Four Black Women and the Space Race

At a time when “colored” water fountains and separate bathrooms also meant that African-Americans were excluded from many good jobs, Dorothy Vaughan, Mary Jackson, Katherine Johnson, and Christine Darden made themselves indispensable to the National Advisory Committee for Aeronautics, which became NASA in 1958.

These four African-American trailblazing mathematicians worked as NASA computers before machines performed mathematical computations for the space program despite sexism and segregation that made their jobs extremely difficult. In one spread, Freeman uses the gutter to separate these four women from several white women, illustrating how the black and the white computers worked apart, used separate bathrooms, and ate in separate lunchrooms despite working on the same kinds of assignments. While Shetterly and co-author Conkling emphasize these women’s tenacity, the picture-book lacks some aspects of their characters that the Hidden Figures film to which this is a companion captures well: their subversion, their senses of humor, and the community they built among black NASA employees as conditions improved. Their somber expressions throughout most of the illustrations imply that they found little enjoyment in their work, but their longevity at NASA suggests otherwise. Rich backmatter offers a timeline of historical events, biographies, a glossary, and an author’s note from Shetterly.

An important story to tell about four heroines, one that will lead young readers to the longer, more-nuanced coverage available when they are ready