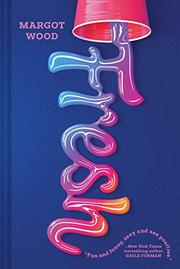 In this story loosely inspired by Jane Austen’s Emma, Elliot is an outgoing, undeclared, new student at Boston’s Emerson College. She immediately becomes close friends with her roommate, Lucy Garabedian, who comes from a large Armenian American family and has far more ambitious college and career plans than she does. Elliot’s primary goal is to sleep with many people of any gender and with no commitments. This comes to fruition but isn’t as fulfilling as she thought, especially as she dwells on a conversation with Rose Knightley, her gorgeous resident adviser, about what constitutes good sex. Additionally, her courses are more of a struggle than she expected, and her behavior results in friendship hurdles. As the year progresses, Elliot learns more about who she is, what she wants, and what it takes to be a good friend and romantic partner. Elliot’s meta, first-person narration is conversational and often hilarious, with footnotes and sections directly addressing readers and inviting their participation. While it’s sometimes over-the-top, it all fits with Elliot’s exuberant persona. She’s a well-crafted, messy character who makes mistakes but ultimately means well. Unabashedly sex-positive and queer, this story is mostly light and breezy, but it has serious moments as well. Elliot is assumed White; there is some ethnic diversity in secondary characters.