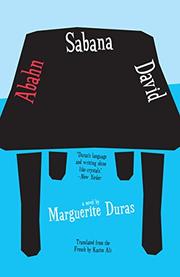 In English for the first time, a 1970 French novel from prolific experimentalist Duras (The Lover, 1984, etc.)

In this brief novel the action is staged like an existentialist thriller, the prose reads like surreal noir, and the crime taking place is genocide. On a cold night in a town called Staadt (identified later as Prague), a Jewish man named Abahn is visited at home by a woman, Sabana, a stonemason, David, and another Jewish man also named Abahn. David has a gun, and Sabana tells the second Abahn that the first Abahn, whom she calls “the Jew,” will die at daybreak thanks to Gringo, the local leader of “the Party.” They spend the night deep in debate about their roles and motivations in the plot to kill Abahn the Jew. As dogs howl outside, the characters sometimes go deaf and blind, speaking while half-asleep about gas chambers, Soviet concentration camps, “the field of death,” and, awkwardly, “the sliding scale of the minimum wage.” Dialogue gets repeated back and forth as if the group is questioning each word’s meaning; their movements are logged meticulously, adding great tension to some scenes, absurdity to others, and translator Ali’s deft touch rendering this unreal environment's slippery fictive power is laudable. Duras positions the book’s moral center as a question of self-awareness, forcing Sabana and David to see how outside forces affect their smallest actions and thoughts: as the second Abahn says to Sabana, “I say if it’s David who pulls the trigger, it’s still Gringo who has killed him.” As gunfire erupts late in the book, David and Sabana must face the temptation to absolve themselves from blame by letting the faceless state take responsibility for their parts in the violence.

Despite some clunky political commentary, a gripping meditation on the nature of fear, silence, and survival.