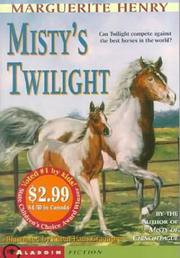 Billed as fiction but more like a fictionalization concerning one of Misty's descendants (dedicating the book to ``Dr. Sandy Price''—the name of the human protagonist here- -encourages that surmise). Many of Henry's books, including Misty of Chincoteague (1947) and her Newbery-winning King of the Wind (1948), are basically fact though couched as fiction; unfortunately this, without explanation, works as neither. The story opens with Sandy—physician, owner of a Florida farm that raises thoroughbreds, and (apparently) single parent- -dragging her unwilling kids (Pam, 10; Chris, 7) to Chincoteague, where they purchase four ponies at the annual auction. One of these, bred to a thoroughbred, becomes the mother of Twilight, a feisty, intelligent scamp of no known breed that no one knows quite what to do with. While the kids grow up offstage, Sandy tries one trainer after another, first hoping to show ``Twi'' as a cutter, then as a jumper, and finally in dressage—the 1996 Olympics are mentioned as a possibility. Henry knows her horses and writes well about their quirks, charms, and behavior; but though this adult-centered narrative about an affluent doctor—whose troubles with her horse are always addressed by hiring yet another trainer—may be authentic, it will be of interest mostly to those who relish every crumb about Misty's family. (Fiction. 9-12)