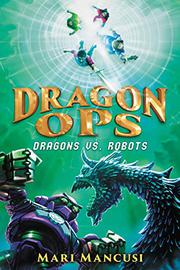 From the Dragon Ops series, volume 2

An avid gamer and his sister enter an apocalyptic virtual reality world to rescue their imprisoned friend.

After getting trapped and nearly killed in Dragon Ops, a fantasy augmented-reality theme park, Ian Rivera has sworn off the internet. He’s haunted by visions of Atreus, a vicious AI dragon who escaped from the game. When Ian and his sister receive a plea for help from their friend Ikumi, a digitized copy of the Dragon Ops creator’s deceased daughter, Ian must face his worst fears to set her free from Mech Ops, a virtual reality game about robots and zombies. A troubling theme touting video games as a glorious “equalizer” runs throughout, clearly positioning disability as negative and its elimination in the virtual environment as a positive. Starr, a Black woman whose role seems to be to teach Ian about coping with trauma, uses a wheelchair but plays the most physically mobile character (without a wheelchair) in the game, stating, “We may not be able to run in real life. But we can fly in his games.” When Ian learns that the Mech Ops chimpanzee beta tester uses sign language in real life but is able—and prefers—to speak inside the game, he thinks, “This was so awesome. It was really hard to see it as a castle of evil.” The book follows a White default; the Riveras’ surname may be intended to cue them as Latinx.

A fast-paced adventure that promotes harmful messages around disability.