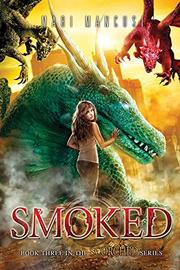 From the Scorched series, volume 3

No one is immune to sacrifice and revenge, and sometimes even a vegetarian dragon can have a taste for blood.

In the third and final book of the Scorched trilogy, 16-year-old Trinity Foxx and her back-from-the-future beau, Connor, rescue Emmy the dragon from a government lab. Emmy, the brunt of aggressive experimentation, is now an unrecognizable husk of the majestic creature she used to be. What’s more, the telepathic connection between Emmy and Trinity has been severed. While Trinity struggles to reconnect with Emmy and restore the dragon’s dignity and vitality, Emmy’s secret is unearthed: she has two hatchlings. Are the adorable duo two tools to convince the world through social media campaigns that dragons should be admired and preserved? Or are they two ticking time bombs waiting to ignite an apocalypse known as The Scorch? In the multiple-narrator, nonlinear narrative, there is a heap of “if only I had done things differently” retrospection—a natural reaction when one glorious catastrophe after another (death, destruction, public outcries against dragons) occurs. But the fighting, biting, and fire breathing are less about violence and more about avenging wrongs and simply surviving. This final installment is about damage done despite Trinity’s efforts to prevent The Scorch, pronouncing that when you’ve been betrayed and broken, civility is off the table.

Where there’s smoke, there’s fire. And dragons. And the end of the world.