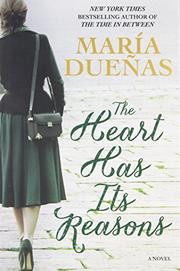 THE HEART HAS ITS REASONS

A professor desperate to escape her problems stumbles into research that will change her life in this novel from Dueñas (The Time in Between, 2011).

When Blanca Perea’s husband leaves her for another woman, she wants to get away from her shattered life as soon as possible. She accepts a research grant that takes her all the way to California, as far from Madrid as she can get. Blanca doesn’t even care that her project involves nothing more than sorting through the abandoned papers of a long-dead professor. She decides to commit herself fully to organizing Andres Fontana’s legacy instead of focusing on her lackluster personal life. She eventually gets to know many of her colleagues, including an old professor, Daniel Carter, who just so happened to be a friend of Fontana’s. Through reading his papers and studying his life, Blanca starts to realize that Fontana actually lived a remarkable life…and that Carter might be more connected to him than she originally realized. Through flashbacks, the reader learns about Fontana’s formative years, as well as Carter’s time in Spain. The flashbacks contain so much information and historical background that they can be hard to follow. While they’re certainly interesting and informative, they slow down the pace of the story. However, the parallels between Blanca’s life and that of the man she’s studying are beautifully detailed.

A slow-paced but ultimately satisfying story of a woman who comes to terms with her past by investigating someone else’s.