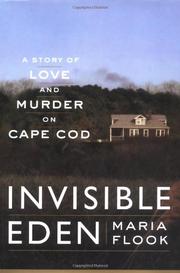 A Story of Love and Murder on Cape Cod

Chilling, edgy backgrounder on the high-profile 2002 murder of a fashion journalist.

It was a nasty piece of work: 36 hours passed before a former lover entered Christa Worthington’s Cape Cod home and found her corpse, with her toddler daughter nursing at her breast. Such a lurid case has already attracted lots of coverage, but Flook applies to the tale a fine hand for characterization, whether spun out or pinched to a paragraph. The “piebald gymkhana” of suspects attains a prismatic quality, though sympathy is kept at arm’s length. The author doesn’t just scan those within the “orbit of opportunity” for killing Worthington, but all the denizens of Truro, Massachusetts, from the swamp Yankees to the parvenus with their trophy homes. Often mythologized as an artists’ colony, Truro is really “Nowheresville,” claims crotchety poet and resident Alan Dugan, with its “wannabe artists, dilettantes, losers, pirates and profiteers, eccentrics and misfits.” And novelist/memoirist Flook (My Sister Life, 1998, etc.), too: she lives in the town and quietly, appealingly insinuates herself into the story. Her clinically precise portrait limns Worthington as a gifted writer whose unusual style—part alchemy, part anthropology—set her apart in the world of “icy fashionistas and wage-war garmentos.” But she was also a house-wrecker and a stalker; as the district attorney covering the case said, “The more we look at her, the uglier she gets.” Flook remains, at least on the surface, nonjudgmental; she allows the characters to hang—or exonerate—themselves. She’s also very good on Truro’s landscape, the remoteness that’s kept the town charmed and protected, though it has its share of notorious history. Even her conjectures and color commentary have the grace of authority.

A thoughtful, measured tone gives this tale of murder a sense of depth and reach, like a good poem.