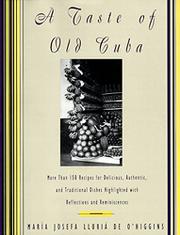 A TASTE OF OLD CUBA

More Than 150 Recipes for Delicious, Authentic, and Traditional Dishes Highlighted with Reflections and Reminiscences

The text in this debut memoir/cookbook is nothing short of charming and recalls Zarela Martinez's Food From My Heart. O'Higgins paints her pre-Castro Cuban childhood in idyllic colors and calls a lost world to life. Family photographs add to the sweet, personal feel. However, while the essays and notes benefit from intimate detail, the recipes do not: Many feel like a-pinch- of-this-a-pinch-of-that attempts to nail down techniques that are second nature to the author. For example, directions for fried plantains instruct, ``Fry the plantain slices until they are almost black but not burned'' without giving any idea of how much time that will take—a problem for novice plantain cookers. Variety apparently has never been the spice of life in Cuba: Many of these are more or less similar recipes for the same dish. There are three different black-bean recipes and four for cooking rice, and that's only in the chapter on rice and beans. Another section gives 14 rice entrÇes, most with similar seasonings. O'Higgins warns that Cuban desserts are achingly sweet (because sugar production was the backbone of the Cuban economy, consuming it came to be considered a patriotic act), and she is not kidding. A light eight-by-eight- inch sponge cake is drowned in a cup of port and more than two cups of a supersweet lime-cinnamon syrup. Good reading, bad eating.