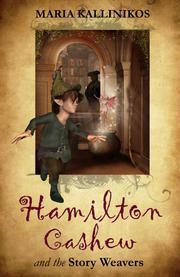 HAMILTON CASHEW AND THE STORY WEAVERS

In Kallinikos’ debut YA fantasy novel, an intrepid elf must foil a plot to stop the production of stories.

Hamilton Cashew, an elf with the power of levitation and a vivid imagination, lives in Blix Largus, a suburb of the city of Literatus. Hamilton studied Creative Arts at the university and hopes to join the Story Weavers, a group of highly skilled elves responsible for story creation in the kingdom. He currently works as a book stacker in the Literatus Library, where he encounters Effluvius Acorn, the general manager of the Story Weaving Factory. Effluvius has a major problem: Despite the factory’s strict controls, a key ingredient in the story weaving process has disappeared, along with the ingredient’s recipe. Effluvius wants to locate the book that contains the recipe and make a replacement batch before the theft is noticed. After a search of the library proves futile, Hamilton suggests finding the wizard who originally wrote the recipe. Effluvius agrees and sets Hamilton on an incredible journey, during which he encounters powerful allies, unlikely villains and a devious plot. The fantasy elements of the story work well, but the modern touches may seem a bit out of place to some readers; Literatus is populated with elves, fairies, pixies and other magical creatures who cast spells, weave stories and fear witches, yet they also have access to computers, watch reality television, and order pizza. However, Hamilton is a brave, likeable hero of impressive ingenuity, and Kallinikos surrounds him with a well-developed supporting cast, including a cantankerous but helpful wizard named Festoon Gregarious. The nicely paced story also offers some clever action scenes, including one in which Hamilton is trapped inside a painting depicting a bullfight.

A charming fantasy tale with contemporary elements that may occasionally stretch the limits of credibility.

THE WELL OF LOST PLOTS
by Jasper Fforde
Fiction