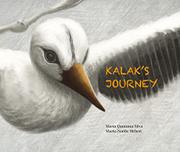 With a nostalgic longing in their hearts but also hope for the future, Kalak the stork and his family leave their old home seeking a better one.

The family embarks on a long and tenuous journey that lasts weeks. Young Kalak, especially, is exhausted and lags behind the flock, almost catching up only to be separated from them again by a storm. Injured and alone on a rooftop in a foreign city, he awakes to the sight of “elegant” local storks. “Get off our roof!” and “There is no room for your here,” say some of them, but another gives Kalak a warm embrace and guides him away to a place where he is found by his family and reunites with them in joy. Finally, Kalak’s flock finds a new home where there is food for everybody and help from others, and he, “a stork of the world,” is now “free to fly high and discover new horizons.” Hébert’s textured, mostly black-and-white illustrations, done in what looks like graphite and with touches of colored pencil, lend themselves to the tenuousness of the storks’ journey. The timing of this book’s publication and the cityscape of the journey’s destination suggest a likely link to Europe’s immigration crisis. Readers may notice gaps in the storyline, and the parallel between human refugees and storks is a forced one.

A story about migration and survival with a universal theme and a happy, not-altogether-convincing ending.