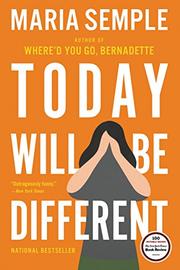 TODAY WILL BE DIFFERENT

A day in the life of an enchanting and gifted woman who is almost too frazzled to go on.

The women on the verge of a nervous breakdown, the mad housewives, and the Annie Halls can welcome a new member to their club: Eleanor Flood, the narrator of Semple’s (Where’d You Go Bernadette, 2012, etc.) second sendup of Seattle and its denizens. Eleanor, formerly a New Yorker and the animator of a popular cartoon about four girls in “ '60’s style pinafores” misdirecting “their unconscious fear of puberty into a random hatred of hippies, owners of pure-bred dogs and babies named Steve,” lives in Seattle with her sweet Seahawks doctor husband and her precocious, makeup-wearing third-grade son. Timby goes to Galer Street School, an ultra–PC environ familiar to Bernadette fans, where Eleanor imagines his arrival was greeted with delighted cries of “Eureka! We’ve got a transgender!” This book is so packed with interesting characters and situations, it could have been three times as long. You want more New Orleans Garden District (where Eleanor’s sister has been kidnapped by an effete Mardi Gras krewe captain), more New York animation studio, more poignant childhood stories (dead actress mother and alcoholic father, illustrated in a beautiful color insert), more annotated poems ("Skunk Hour," by Robert Lowell). Only one thing you don’t want more of—a weird plotline about husband Joe’s secret life. As Eleanor tells Timby when they visit a public art installation, “I don’t mean to ruin the ending for you, sweet child, but life is one long headwind. To make any kind of impact requires self-will bordering on madness. The world will be hostile, it will be suspicious of your intent, it will misinterpret you, it will pack you with doubt, it will flatter you into self-sabotage—My God, I’m making it sound so glamorous and personal! What the world is, more than anything? It’s indifferent.” Ah, Eleanor. You could have stopped at glamorous and personal. Because few will be indifferent to this achingly funny and very dear book.

This author is on her way to becoming a national treasure.