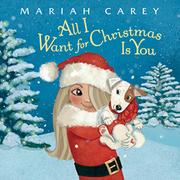 ALL I WANT FOR CHRISTMAS IS YOU

Carey’s zillion-selling Christmas song is paired with pictures that put a slightly different spin on the original’s romantic yearning.

A picture of mini-Mariah hugging a white-and-brown terrier puppy on the cover establishes the tone. As the story opens, the little girl walks past a storefront advertising “Puppy Love Adoption” and spends the next several pages incorporating dogs into her Christmas preparations: she draws pictures of dogs and makes dog-shaped cookies, a dog puppet, a snowdog, etc. Around her, her siblings likewise prepare, sometimes in clever counterpoint. Mini-Mariah sits reading a book about dogs while her siblings compose comically extensive lists as the text reads, “I won’t make a list and send it to the North Pole for Saint Nick.” Madden creates a standard-issue snowy American suburb with a pleasingly multiethnic cast of characters. Carey’s own ethnically mixed heritage is hinted at with an African-American grandmother and Caucasian grandfather; the protagonist’s siblings all have light-brown skin and short, curly, dark hair. This creates a jarring dissonance with mini-Mariah, who is depicted with her signature flowing, blonde locks flopping conspicuously over one eye. Readers familiar with the song will wonder how any picture book might jibe with Carey’s vocal rendition, suffused with sexual longing in its first verse, but the mood of the pictures matches the song’s overall pep. The book’s biggest problem is that the direct address to “you” throughout the song is developmentally out of sync with the younger members of its audience, who will be thinking, “Who, me?” instead of the hoped-for dog every time the text iterates “you.”