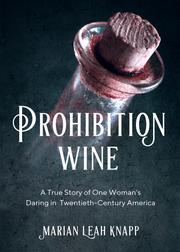 A True Story of One Woman's Daring in Twentieth-Century America

A family history that doubles as an immigration primer.

This biography of Knapp’s grandmother highlights her participation in the illegal liquor trade during the Prohibition era. The author, a community activist, tells the story of a Russian Jewish immigrant family in Boston who later moved out to the country in Wilmington, Massachusetts. The book’s main focus, however, is on the resourcefulness and resilience of the widowed Rebecca Goldberg amid many hardships and obstacles. It highlights her foray into the 1920s liquor market, emphasizing that she only did it for her family’s survival and that her participation lasted only until it became too risky; along the way, she was tried in court for selling liquor to a detective and found not guilty. The work includes family photos, illustrations, as well as reprints of relevant newspaper clippings. Overall, Knapp, the author of A Steadfast Spirit (2017), presents a solid personal history over the course of the text. However, as a microhistory of the Jewish immigration experience in the early 20th century, it’s somewhat limited, although the opening chapter about the journey from pre-revolutionary Russia works well. Other historical information seems extraneous, however, such as an overly lengthy discussion of what Goldberg may have used for the purposes of birth control. Also, the book’s title feels a bit misleading, as this is not a work about the glamorous and risqué speak-easies that most people associate with Prohibition. Despite this, the book remains an important and informative story about Eastern European Jewish immigrants of the era.