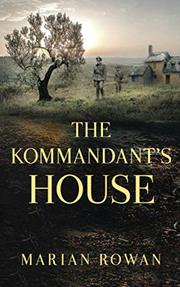 Marguerite is 14 years old when her French village is invaded by the German army during World War II. It’s 1940, and the early days of the occupation remain relatively peaceful on the orders of Maj. Wolfgang Müller, the area’s Kommandant. Although her mother despises all Germans, Marguerite agrees to cook for the Kommandant and his staff and is surprised to observe that Müller is a kind, upright man. The novel alternates between Marguerite’s observations and the Kommandant’s letters and diary entries, which show that he remains a devoted husband and father, treats French citizens with dignity, and believes that his ultimate goal is to send the message that “Germany is beginning its momentous task of moulding Europe into its own likeness.” For Marguerite, the most momentous change is that she falls in love with a young German soldier and must hide her affair from her family. Meanwhile, the Kommandant faces a challenge from an officer who believes the area needs harsher policies, and he worries about the motivations of Nazis like this man, whom he considers “a bully in a uniform.” From this dramatic first section, the book jumps ahead 50 years to follow Catherine Swannell, who has been invited to visit her distant cousin Marguerite. Catherine becomes engrossed in reassembling the past, searching for answers to lingering questions about what happened long ago. In this thoughtful novel, Rowan brings the French countryside to life with gentle, lyrical descriptions. Nations may grapple with war around the globe, she suggests, but beauty can still be found amid the “rippling river,” the “silky golden stubble” of wheat, and the “rustling of birds settling” in the hedgerows of this close-knit village. The layered, sympathetic figure of the Kommandant provides the story’s major questions: How can good compete with an evil that follows no rules or code? And at what point do your intentions clash with your reality? There’s a sentimental streak to the romantic passages, but overall the author capably adds nuance to familiar set pieces.

An absorbing look at how the high-stakes circumstances of war reveal character.