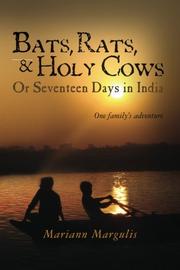 Or Seventeen Days in India: One Family's Adventure

A travel memoir from a mother and her two young sons on a tour of India.

On the flight to New Delhi, Margulis and sons—Julian, 12, and Fillip, 10—unhappily discover that their seats’ entertainment systems are out of order, a tip-off to the fact that, although they’re anxious for adventure, the family isn’t quite ready to leave behind their creature comforts. The sheets, towels and napkins in their hotels are covered with brown stains, and the author spends too much time describing her attempts to procure clean replacements. Their drivers don’t speak much English, Margulis repeatedly informs the reader; similarly, it would be better to tell the reader fewer times that some Indians are unable to determine whether her kids are boys or girls, thanks to their long hair. Eight days of the trip coincide with Passover, something Margulis seems not to have planned for, so she has a hard time explaining to waiters the ingredients her family needs for their Seder. Margulis has an assortment of other concerns: sharing train compartments with strangers, cold water in hotel showers and other worries she probably should have expected, or could have avoided by not venturing beyond typical tourist haunts. Thankfully, the whining fades away as the charms of India win over the family, and readers will be engrossed in the trio’s experiences in Varanasi, Agra, Jaipur and especially the Thar Desert. Margulis offers information about each place they visit, finally relaxing enough to enjoy the new experience by coming to ignore the things that so preoccupied her in the beginning of the book. Her writing is strong (she has contributed to Fodor’s) and readers may come to see her as something of a parental role model because she allows her sons to experience India on their own terms, not necessarily hers. As long as there’s a glass of wine with dinner, Margulis is a happy traveler indeed.

By turns amusing, touching and occasionally irritating, this travelogue colorfully portrays India, perhaps convincingly enough for readers to want to visit with their own children.