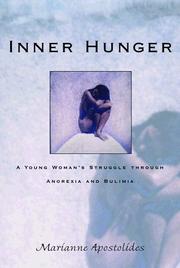 A Young Woman's Struggle Through Anorexia and Bulimia

Persuasive in its realism, this brief journal attempts to be a guidebook for the girls and women—and their friends, relatives, and therapists—who suffer from eating disorders. Waking up to the detritus of another night’s bingeing—empty wrappers of “cookies, muffins, granola, bread”’set the author on the road to ending a decade of first starving herself, then bingeing and purging. She vacillated from skeletal (80 pounds) to rotund (160 pounds) as she moved through junior high, high school, college, and into the work world. Apostolides’s bouts of starvation and gluttony were apparently concerned with the issue of stet control, meant to transform herself through sheer willpower into the kind of person she thought her parents and others wanted her to be. Beginning at about 14, she exercised, played sports, got good grades, and virtually stopped eating, hoping she would be admired and accepted as her stellar older brother had been. However, while her peers “were learning what it felt like to explore adolescence, I was learning what it felt like to explore anorexia.” Two years later, she began to experiment with bingeing and then purging, vomiting boxfuls of cereal, packages of cookies, and containers of frozen yogurt eaten at one sitting. She finally did enter therapy, and benefited for awhile, but then plunged back into the binge-purge pattern as college graduation neared. In fits and starts, with the help of the drug ecstasy (she warns of its dangers), an assortment of therapists, a series of lovers, and finally a move from Manhattan to California, she acquired the tools to deal with her disorder, to reconcile with her parents, and to “nurture” herself “in other ways.” Notably straightforward recounting’sans melodrama—of the pain,frustration, and feelings of helplessness experienced by Apostolides and her fellow travelers.