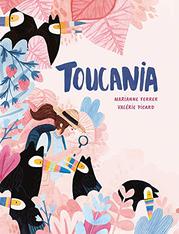 An explorer visits an island of fantasy animals in this Quebecois import translated from French.

Amelia’s off on an expedition. She’s a grown-up, but when she was little, her grandfather found an unusual island and told her about it. He went only once, and she too can go only once: À la Brigadoon, it’s accessible for a single day every 50 years. Amelia’s knowledge of the island comes from her grandfather, who’s invoked repeatedly. Frequent exclamation marks (“She’s smiling so hard that her cheeks hurt!”) don’t enliven the bland present-tense prose or successfully force excitement. The island’s mythical fauna thrill Amelia, but while they’re conceptually whimsical—merbears, hedgemunks, howlverines, koalaroceroses—both the animals and the setting are pale and lackluster. For an island with “intense heat,” scents of vanilla and nectar, colors that “overwhelmed” Amelia’s grandfather, and “beauty [that’s] astonishing,” the low-intensity hues are watery and washed-out, and repetitive background patterns evoke wallpaper. Amelia, like her grandfather, holds the title of “doctor,” but her trip emphasizes delight, not research. Given that, and given the implied tropicality of the island, the whole piece has a whiff of colonialist tourism: Amelia and her grandfather both carve their initials into a tree; the island has a “real name” they never learn; and Amelia presents White. Her grandfather, shown only in black and white, has a swarthy complexion.

Safe to stay home from this trip.