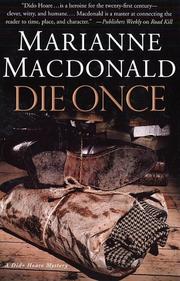 Timothy Curwen was always a steady if somewhat overdressed customer, so antiquarian bookseller Dido Hoare doesn’t like it one bit when he takes a swan dive off his balcony. Especially not when the check for his last purchase, Dickens’s The Haunted Man, bounces. His solicitors at Price Rankin Burke are apologetic, sending assistant Dona Helmer to escort Dido to Tim’s flat in Marylebone in hope of retrieving the Dickens and offering her a handsome sum to appraise his collection. But Dido is shocked to find nothing of any value in the bookcases of the fifth-floor flat. She does find Smith and Waites, two officers from the Seymour Street station whose scene-of-crime demeanor leads her to suspect that Tim’s leap wasn’t exactly voluntary. Her suspicions are fed as she follows the efforts of crime reporter Christopher Kennedy to track down Curwen’s missing collectibles and to trace his equally elusive sister, Theresa Clark. Leaving her three-year-old son Ben with her father Barnabas, Dido goes undercover along with her sometime boyfriend, DI Paul Grant, trawling the pubs of Hackney in hope of catching a glimpse of the shadowy Theresa. Instead, she runs into Kennedy, and, ricocheting between the two men, threads her way through a web of deceit even denser than the shelves in her well-stocked shop.

Crisp dialogue and just enough London mise-en-scène give Macdonald a leg up on her competitors in the single-heroine-with-too-many-boyfriends genre—although the main twist in this plot is obvious all the way from Russell Square.