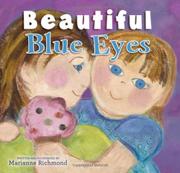 Richmond offers a bland and confusing a companion to her Beautiful Brown Eyes (2009). The story mostly focuses on how much the narrator, presumably a mother or group of mothers, loves her (or their) blue-eyed children in their many moods. These moods are apparently supposed to be obvious by the children's expressions, but the faces remain relatively unchanging on many pages, often sporting near-identical smiles. On the page describing a child’s tears, the child looks startled, not sad or in pain from the shot she’s receiving. Buttons and yarn add a collage element to the smudgy full-color images but do nothing to clarify the relationship between text and pictures. The text unfolds in rhyme; an unfortunate choice, as syntax and rhythm are frequently forced: "Pretty, for sure, / those 'blues' I know, / and, oh, what they tell me / 'bout you as you grow." Overall, the impact is jarring and poorly executed. Rather than confuse a young audience, explore emotions with My Many Colored Days, by Dr. Seuss and illustrated by Steve Johnson and Lou Fancher (1996), or Flyaway Katie, by Polly Dunbar (2004). For books on parental love, try All the Seasons of the Year, by Deborah Lee Rose and illustrated by Kay Chorao (2010), or Who Loves the Little Lamb?, by Lezlie Evans and illustrated by David McPhail (2010). (Picture book. 3-5)