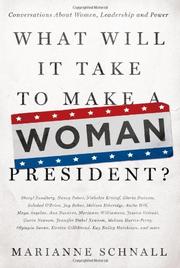 WHAT WILL IT TAKE TO MAKE A WOMAN PRESIDENT?

Conversations About Women, Leadership, and Power

“When so many other nations have women presidents, why doesn’t the United States?” Feminist.com founder Schnall (Daring to Be Ourselves: Influential Women Share Insights on Courage, Happiness, and Finding Your Own Voice, 2010) is a sensitive, perceptive interviewer who leads each of the more than two dozen conversations that she transcribes in this book with some variation on its titular question. The answers to this initial query tend to hit on a few unsurprising explanations: systemic sexism, the burdens of raising families that still tend to fall on women, and a lack of willingness of women to step forward and run for political office. The author effectively leads her interlocutors (mostly, but not all, women and mostly, but not all, liberal) through wide-ranging conversations that use the initial question as a springboard to more substantial discussions about women in politics, women’s leadership more broadly and the changing state of American gender relationships. This makes the book worthwhile since the initial question is not especially interesting, or at least not as interesting as the larger context within which women politicians, business leaders and others operate. The book touts that Schnall’s conversations are with “thought leaders,” a label that may be generous to at least a few of them, but she does draw on an impressive array of politicians, business figures, entertainers and others to provide a snapshot of the roles of American women in the corridors of power. Of the many contributors, some of the more well-known include Maya Angelou, Olympia Snowe, Nancy Pelosi, Gloria Steinem, Anita Hill and Nicholas Kristof.

Barack Obama smashed down one long-closed door in 2008. This book makes a compelling case for another shattering of barriers sooner rather than later.