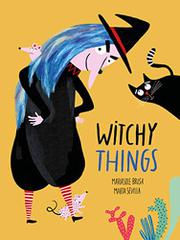 From the Égalité series

In this Italian import by way of Spain, when a witch’s potion goes wrong, she sets out to do some other witchy things only to have a child question her actions.

Humorous and quirky illustrations accompany this equally whimsical tale of a witch whose potion doesn’t work. “For the love of STINKING SKUNK FARTS!” Her hair is still blue. She would rather her hair were “BLOOD RED, OR ASH GREY, or perhaps BOOGER GREEN.” In a bad mood and wanting to prove she is “A REAL WITCH, a really BAD ONE” she sets out to snatch a child. Soon she spies a red-haired, white boy named Adam, who is playing with dolls. Assuming he’s a naughty brat playing with his sister’s dolls, Adam becomes her target. A circular conversation ensues whereby Adam’s persistent, repeated “BUT WHY?” turns the witch’s stated intentions back on her. As it turns out, Adam loves styling hair, and after styling the witch’s hair she declares it to be “the MOST INCREDIBLE SORCERY I’ve ever seen!” Adam helps the witch to see it is more important to “do THINGS YOU LIKE, just because you like them” than “witchy things to FEEL more like a witch.” This clever tale of upended expectations was winner of the Italian children’s literature prize Premio Narrare La Paritá (Narrating Equality Award) under its original title, Turchina la strega. An equally delightful Spanish edition, Cosas de bruja, translated by Raúl Zanabria and Luis Amavisca, publishes simultaneously.

Stereotypes are oh-so-satisfyingly turned on their heads.